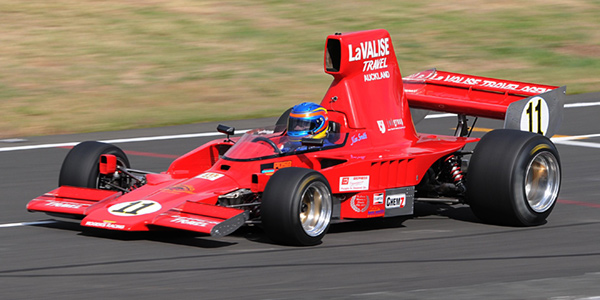 The separate Australian championship was abandoned after a single season, and the main Tasman Revival series for 2014/15 included VHRR Historic Sandown in November 2014 and a race at Sydney Motorsport Park a few weeks later before moving to New Zealand in January for four races, culminating in a support race for the New Zealand Grand Prix. Tom Tweedie continued his impressive form in the heavily modified Chevron B24/28, winning at Sandown from Clark Proctor (March 73A) and Steve Ross (McRae GM1). At Sydney Motorsport Park, Tweedie's Chevron broke its suspension as he went out for Saturday morning practice, so he missed that afternoon's race, allowing Proctor to take an easy win. Tweedie was back for the Sunday, and won both races comfortably. Tweedie did not travel to New Zealand, and it was Kenny Smith, who had skipped the Australian races, who dominated both weekends at Hampton Downs in his Lola T332, with Proctor and Ross picking up the minor placings. For once the Lyons family were not competing at Hampton Downs, so the very healthy turnout of 20 Kiwis was joined by just two Australians and three Brits, Only 13 cars turned up to the Skope Classic, where Ross was in charge, with Sefton Gibb (Lola T332) his closest rival, but Smith was back for the New Zealand GP meeting, winning all three races as Ross battled with Andrew Higgins (Lola T400) for the other podium places.

Of the leading runners, only Ross had competed in all six races, so he took the championship by a considerable distance.

Including the four Australia Cup races in 2013/14, a total of 67 F5000 Tasman Revival events had taken place by the end of the 2014/15 season. The drivers who had taken part in the most were as follows.