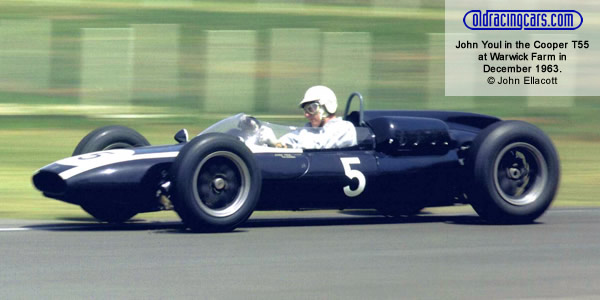 The importance of consistency was clearly demonstrated by Bib Stillwell in 1963 as he took the Gold Star without winning a race in his all-new Brabham BT4, a beefed-up 2.7-litre version of the BT3 F1 car. His strong performances in the Internationals had bagged maximum points at two races but not before his rival John Youl had qualified an impressive second at Lakeside only to retire. When the season restarted in September, Youl took a second and two wins from the last three places but couldn't catch Stillwell for the Gold Star.

Jack Brabham won the Australian GP in his works Brabham BT4 from John Surtees in the Bowmaker team's ex-F1 Lola Mk 4 and Surtees then won the Lakeside International a week later in Jack's absence. Bruce McLaren won at Longford and Sandown Park in Tommy Atkins' custom-built Cooper T62. Lex Davison then took over that car to win the Victorian Trophy at Calder and the Bathurst 100, both in April and neither counting towards the Gold Star. Davison won again at the Victorian Road Race Championship at Sandown Park in September before John Youl won the final two races in his 1961 ex-F1 Cooper T55.

In 1963, the first three rounds of the six-race Gold Star were the three Internationals at Warwick Farm, Lakeside and Longford so the winner of those races was typically not eligible for the Gold Star. Jack Brabham won the Australian Grand Prix at Warwick Farm but the other two were won by John Surtees (with Bib Stillwell getting 12 pts for third place) and Bruce McLaren (with Stillwell second) respectively.

Additional information is still required. Programs are needed for most races - the only exceptions being the Bathurst 100 and the Advertiser Trophy at Mallala. Full results are also needed for the Victorian Road Race Championship at Sandown Park on 15 Sep 1963 where a group of starters remains unknown. Qualifying times are often not known.