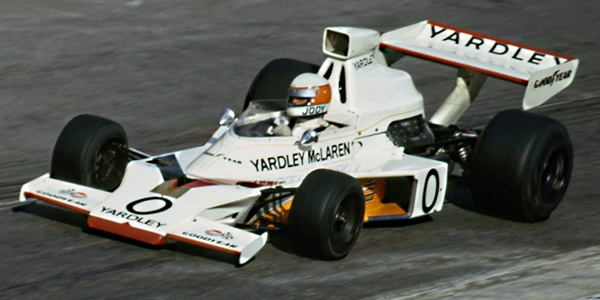 Jackie Stewart and Tyrrell regained their edge over Team Lotus in 1972, and Stewart took his third World Championship with two races to spare. Stewart announced his retirement after the final race, but in a body blow for the Tyrrell team, his teammate and intended successor François Cevert was killed during practice for that last race. For Lotus, Emerson Fittipaldi was very strong in the first half of the season, leading the title race after six races, and Ronnie Peterson was very strong in the second half, winning four races. Alongside the Tyrrell 005/006 and the Lotus 72, the third outstanding car of the season was the new McLaren M23, which won three races in the hands of Denny Hulme and Peter Revson. Carlos Reutemann and the new Brabham BT42 moved Brabham back up the grid after two poor seasons, but Ferrari, BRM and Surtees were all stuck in mid-grid. The find of the season was James Hunt in Hesketh Racing's well-developed March 731.

With Matra's withdrawal at the end of 1972, design and construction of F1 cars was now almost entirely located in England. John Thompson's TC Prototypes built the first two Ferrari 312B3 monocoques as well as the monocoques for the Williams IR series and for the new Tecno E731 designed by Gordon Fowell.

Lotus, Tyrrell, Williams and the new Shadow team ran two-car teams, Brabham continued to run three at most races, as did McLaren, but Surtees ran a third car much less often in 1973. BRM rationalised down to a three-car operation. March had sufficient STP money for one car and ran their second as a hire car, while also supporting two customer cars, the Hesketh Racing car raced by James Hunt and the "stockbroker car" for Mike Beuttler prepared by Space Racing, both teams being new to F1. The other regular team using a customer car was the new Graham Hill Racing with a Shadow DN1, with a tub also fabricated by the busy Thompson. Tecno ran a one-car team, as did new marque Ensign from mid-season.

As F1 evolved through the early 1970s, the factory operations that also produced cars for other categories gave way to specialist F1 teams. In 1973 there were twelve such teams: Brabham, BRM, Ferrari, Lotus, March, McLaren, Surtees, Tecno, Tyrrell and Williams all continued from 1972, and were joined by new teams Shadow and Ensign. Matra and Connew did not continue in F1 after 1972. Brabham, McLaren, BRM and usual Surtees ran third cars. March ran one works car plus a hire car for LEC Refrigeration Racing.

In addition, the independent private teams using customer cars were Space Racing for Clarke-Mordaunt-Guthrie-Durlacher and Hesketh Racing, both using Marches, and Graham Hill's Embassy Racing with a Shadow. All the teams were based in England except Ferrari and Tecno, and all the monocoques were fabricated in England except for Tecno's PA123/6 fabricated by Alan McCall in Bologna.