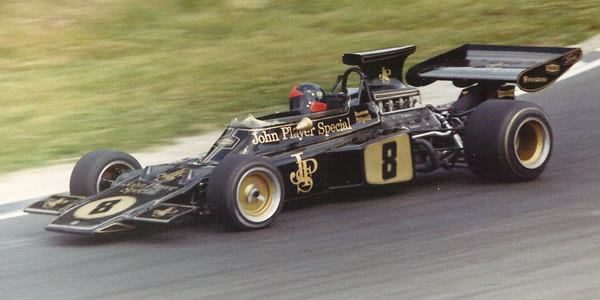 With the benefit of hindsight, it was a surprise that Jackie Stewart did not retain his title in 1972. The team was just as good, but there were problems with the new Tyrrell 005, notably with its inboard front brakes, and Stewart was knocked out of his rhythm by illness, and by the response to the Sunday Times serialisation of his book 'Faster!'. By the time the team had recovered its equilibrium, Emerson Fittipaldi and his Lotus 72D had won the championship.

The power battles in Formula 1 were slowly reshaping the sport, as the GPDA's campaign to improve safety slowly inched the sport away from Spa and the Nürburgring towards new custom-built facilities such as the Österreichring and Nivelles-Baulers. Older circuits had to adapt and modernise or be pushed aside, but the resistance to this was very strong. Also the Formula One Constructors Association was starting to flex its muscles, insisting on a greater share of the revenue for the teams, and improving the packaging of the sport, for example by ensuring that all teams were represented at every race. BRM, Matra and Ferrari were not easily coralled, but Lotus, McLaren, Tyrrell, March and Williams ran straightforward two-car operations in 1972 while Brabham and Surtees ran third cars where sponsorship allowed. Ferrari ran two or three, depending on who was available, but Louis Stanley got completely carried away with BRM's new sponsorship from Marlboro and ran five cars until mid-season when sense prevailed and they returned to a more manageable three.

Nine major factory teams were involved in F1 in 1972: Brabham, BRM, Ferrari, Lotus, March, Matra, McLaren, Surtees and newcomer Tecno, all producing cars for other categories as well as F1. Three other constructors were involved who only built cars for F1: Ken Tyrrell, Frank Williams whose own car first appeared in 1972, and Peter Connew. There were two regular private teams operating new equipment: Clarke-Mordaunt-Guthrie Racing with a March 721G, and Team Eifelland with a modified March 721. Dave Charlton was the only privateer to run his own car at multiple races, but the Gene Mason Racing March 711 for Skip Barber was at both North American races and Team Gunston entered cars for John Love and Willie Ferguson at the South African GP.