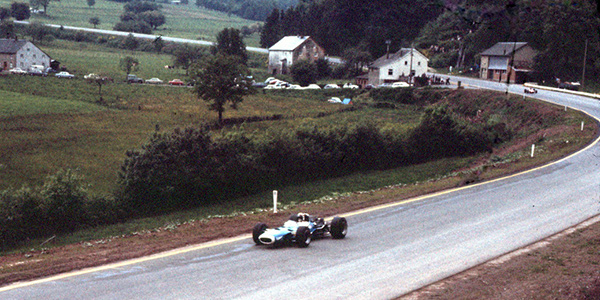 If 1967 was the dawn of the Cosworth DFV, then 1968 was the season it took over. As well as Lotus's well-developed Lotus 49B, McLaren moved to the DFV for Robin Herd's McLaren M7A, and Ken Tyrrell's new team used DFVs mated to Matra MS10 chassis. Other teams collapsed around them. Brabham's new Repco 860 engine in the Brabham BT26 barely finished a race all season, and John Surtees' Honda RA301 was hardly any better. Dan Gurney's Eagle only finished one race before he abandoned the project completely. Cooper moved from Maserati power to BRM's V12 in the Cooper T86B, but with the team's star drivers gone, Cooper sunk to the back of the grid.

BRM and Ferrari continued to build their own engines, but found it very hard to compete. BRM finally abandoned the heavy and overcompicated H16 engine and brought in Len Terry's company to briskly design and build the BRM P126 for the V12 engine, which BRM then developed into the BRM P133 and BRM P138, allowing Pedro Rodriguez to post some good results in the early part of the season before the team fell behind in the race to adopt aerodynamic devices. Jacky Ickx demonstrated the ability of Ferrari's 312/68 V12 with a win in France and pole position in Germany, and teammate Chris Amon won three pole positions. Apart from Tyrrell, the other new team was Matra's own works team, but Matra's V12 engine in the Matra MS11 was clearly not as effective as the Cosworth, and Matra temporarily withdrew at the end of the season.

The sport was rocked by Jim Clark's death in an F2 race in April, when he looked clear favourite to win the championship. Teammate Graham Hill won three races, but he needed to win the final race to seize the championship from Jackie Stewart in the Tyrrell Matra and Denny Hulme in the McLaren.