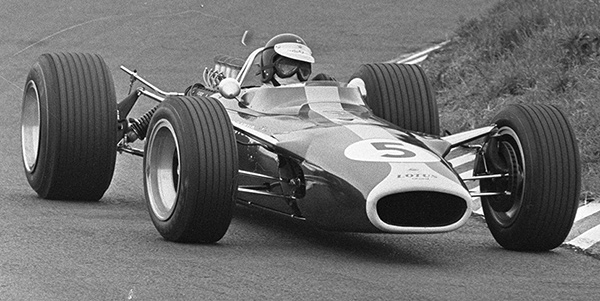 The non-championship races at the start of 1967 gave the impression that the V12s and H16s would overpower the V8s that season. Dan Gurney won the Race of Champions in the beautiful Eagle-Weslake, and Mike Parkes ran away with the BRDC International Trophy in a Ferrari 312/66 with the latest V12 engine, but when the regular season restarted with the Monaco GP, Ferrari were rocked by the death of team leader Lorenzo Bandini in an accident during the race in the new Ferrari 312/67. Meanwhile, rumours suggested that the new Lotus 49 with its Cosworth DFV engine was going very well in testing, and when it made its debut at the Dutch GP, Graham Hill took pole and teammate Jim Clark took the win. One or other of the Lotus 49 drivers took pole at every remaining GP of the year.

Power, it became clear, was not all that mattered. The Honda RA273 was too heavy and unreliable for John Surtees to offer a threat, but a new Lola-built Honda RA300 gave him a shock win at Monza. Jochen Rindt and Pedro Rodríguez had the same weight and reliability problems with the Cooper-Maserati, as did Jackie Stewart in the H16 BRM P83 and Gurney in the Eagle. Even the Lotus 49 retired more often than it finished. The cars that did finish, almost every time, were the Brabham BT24s of Denny Hulme and reigning champion Jack Brabham. Hulme had won at Monaco, and later won at the Nurburgring after Clark and Gurney both retired while leading. Brabham won twice, in France and Canada, but Hulme's run of second and third place finishes secured the championship.

Another new engine that appeared during 1967 was the new BRM V12 which had been intended for sports car racing but when fitted to the McLaren M5A immediately out-performed the BRM works' H16s. There was some interest in this unit for 1968, but Ford convinced both early adopter Bruce McLaren and the project's instigator Jackie Stewart, who was moving from BRM to Ken Tyrrell's new team for 1968, to use the Cosworth DFV instead.