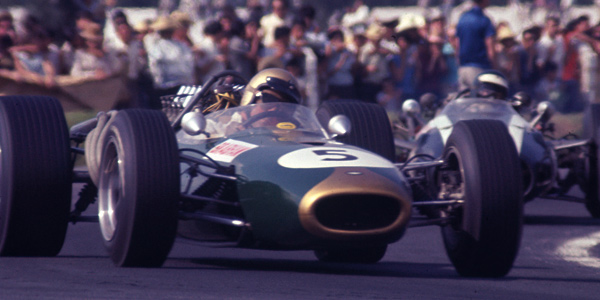 The "Return to Power" created significant upheaval as teams scrambled to find engines for the new formula. Coventry Climax, one of only two engine manufacturers to make their engines widely available to customers, withdrew, leaving only BRM, who decided to make a 3-litre engine by bolting two 1500cc V8s on top of each other to make an H16 for the new BRM P83. Lotus also opted for the BRM engine, for the Lotus 43, and as between them BRM and Lotus had won all the races in the 1965 season, much was expected from this engine. Unfortunately for both teams, it turned out to be underpowered and enormously heavy.

Of the challengers, Brabham were the best prepared, having arranged with Australian company Repco to build an engine based on the Oldsmobile alloy V8. This was first fitted into the Brabham BT19 for Jack Brabham, and then into a new Brabham BT20 for Denny Hulme. Ferrari naturally built their own engine, and had a suitable 3-litre sports car V12 to use as a starting point for the Ferrari 312/66. Cooper Cars' business relationship with Maserati led to an arrangement for an update to the late-1950 Maserati V12 engine to install in the bulky new Cooper T81. Honda also created a V12 engine in-house for the Honda RA273, but it arrived late and was again much too heavy.

Of the newcomers, Eagle commissioned an alloy-block V12 engine from Weslake and would use 2.5-litre Climax engines until that was ready, the interesting new McLaren M2B was let down by its modified Ford quad-cam Indy car engine, and Shannon did not have the funding to develop the 1950s Climax FPE V8 engine. For the privateers, the old 4-cylinder 2.5-litre Climax FPF engine was a viable but uncompetitive option, and 2-litre versions of the BRM and Climax V8 engines remained in use all season.

Monaco was not a representative venue to start the championship, as Jackie Stewart was able to win using one of BRM's 2-litre Tasman BRM P261s. John Surtees won in Belgium in the Ferrari, but then fell out with Ferrari management and moved to Cooper. That left Jack Brabham able to dominate the summer, and the championship was secure before Ferrari, Lotus and Cooper could return to competitiveness.

14 May 1966 > International Trophy at Silverstone

Eight of the teams involved in F1 in 1966 were major factory teams, defined here to be an operation building its own cars and also either its own engines or cars for customers: Brabham (Brabham Racing Organisation); BRM (Owen Racing Organisation); Cooper (Cooper Car Company); Eagle (Anglo-American Racers); Ferrari (Scuderia Ferrari SpA SEFAC); Honda (Honda R&D Company); Lotus (Team Lotus); and McLaren (Bruce McLaren Motor Racing). A ninth operation that could be classed as a minor constructor was the Shannon of Aiden Jones & Paul Emery. There were then five private teams operating new or second-hand equipment: Rob Walker Racing Team with a Cooper T81: Bernard White Racing (also called Team Chamaco Collect) with a BRM P261; Reg Parnell Racing with a Lotus 33; David Bridges with a Brabham BT11; and J A Pearce Engineering with a Cooper T73. Finally there were four privateers, drivers who operated their own car: Jo Bonnier, Bob Anderson, Guy Ligier, and the curious one-off case of Chris Amon, who entered a Brabham at the Italian GP to help the filming of "Grand Prix".